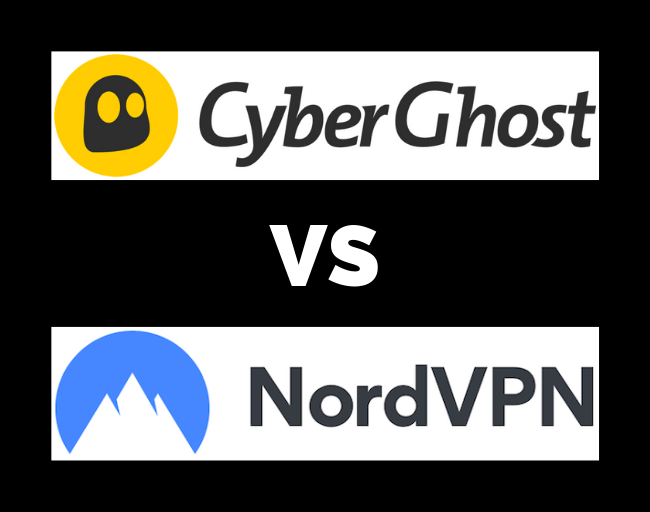 In this new and updated Cyberghost vs NordVPN comparison guide, we put both VPN services through extensive testing and also took a close look at each company. The results revealed a clear winner.

Here’s what we will cover in this NordVPN vs CyberGhost comparison guide:

NordVPN – NordVPN offers slightly better prices than CyberGhost, but you will need to commit to a longer-term plan. Below are the current NordVPN price plans for different subscription lengths.

Note that the best prices are with the 70% discount on three-year subscriptions.

The three year plan is the best deal with the lowest prices. NordVPN is one of the best choices if you want a cheap VPN, but do not want to sacrifice on quality. And as we mentioned before, all plans come with a 30 day money-back guarantee. To track the latest prices and deals, I also have a NordVPN coupon page.

CyberGhost – In comparison to NordVPN, CyberGhost’s prices are slightly cheaper for short-term plans, but is about the same monthly price with the two-year plan at $3.50/month.

Previously, CyberGhost offered a 7 day free trial VPN, but this has been discontinued in favor of a longer refund policy.

Price winner: This is basically tied, with the cheapest monthly rates both being around $3.50

Speeds are a big consideration when choosing which VPN is best for your needs. For the NordVPN vs CyberGhost speed tests below, I was using AES-256 encryption and the OpenVPN protocol with all tests. My baseline (non-VPN) speed was about 160 Mbps.

First I tested CyberGhost. Here was my speed with the CyberGhost server in Germany: 78 Mbps.

Considering my baseline speed was around 160 Mbps, this is not a good speed test result, but it’s also not horrible.

Next, I tested a NordVPN server in Germany and was able to get much faster speeds: 149 Mbps.

NordVPN clearly beats CyberGhost with speeds by a long margin on servers in Germany.

For the next test I used a CyberGhost server in the UK. Once again, the results were not great, at only 56 Mbps.

I then tested a NordVPN server in the UK. The results were just as good as before at around 150 Mbps.

Other tests between NordVPN and CyberGhost with nearby servers in Europe revealed similar results. NordVPN consistently came out on top. With these speeds, NordVPN earns the title best UK VPN.

I also tested servers in the United States.

Here was the CyberGhost VPN server in New York: 76 Mbps.

And here is the speed test for a NordVPN server in New York: 148 Mbps.

With all servers tested in the United States, NordVPN was faster than CyberGhost.

You can see more speed tests in the respective reviews. NordVPN is currently one of the fastest VPNs I have tested. It has greatly improved speeds over the past year. Additionally, NordVPN now supports the WireGuard VPN protocol, which is faster than OpenVPN and IKEv2.

One important update to this guide is that NordVPN now supports the WireGuard VPN protocol. This protocol offers even faster speeds than legacy protocols with updated security. We tested out NordVPN’s implementation of the WireGuard protocol, which they call NordLynx, and were blown away with the performance.

Here we are testing a NordVPN server in Seattle using NordLynx and getting download speeds of 445 Mbps.

NordVPN is currently the fastest VPN we have tested, beating out CyberGhost by a large margin.

CyberGhost and NordVPN both offer interesting features, but with NordVPN, the features consistently work well.

CyberGhost features – One of CyberGhost’s main features is the ad blocker. But as I discussed in the CyberGhost VPN review, the ad blocker does not even work on HTTPS sites. Even worse, it blocks ads on HTTP sites only by using traffic manipulation, rather than through DNS requests. But since most sites are now HTTPS, the ad blocker is essentially useless.

CyberGhost also offers different “profiles” that are tailored to different use cases for the VPN, such as torrenting, browsing, etc.

NordVPN features – NordVPN offers some great features, and unlike with CyberGhost, all the features work correctly. Here are a few of the features that I really liked with NordVPN:

The CyberSec feature is one of my favorites because it will effectively block ads, tracking, and even malware domains. This is enabled directly in the VPN client and it will work immediately. Additionally, blocking ads will also speed up page load speeds, in addition to protecting your privacy.

In addition to all of the features listed above, NordVPN also offers dedicated P2P servers. These offer the fastest speeds if you need a good VPN for torrenting.

Note: You can get more details on all available NordVPN features here.

In terms of security, I did not find any leaks or problems with either NordVPN or CyberGhost.

NordVPN leak tests – I ran NordVPN through some basic VPN test procedures to identify any problems, and everything checked out fine (no leaks or issues):

I did not find any leaks in the NordVPN apps that I tested.

CyberGhost leak tests – Just like with NordVPN, I did not identify any leaks or security issues when testing out CyberGhost VPN. 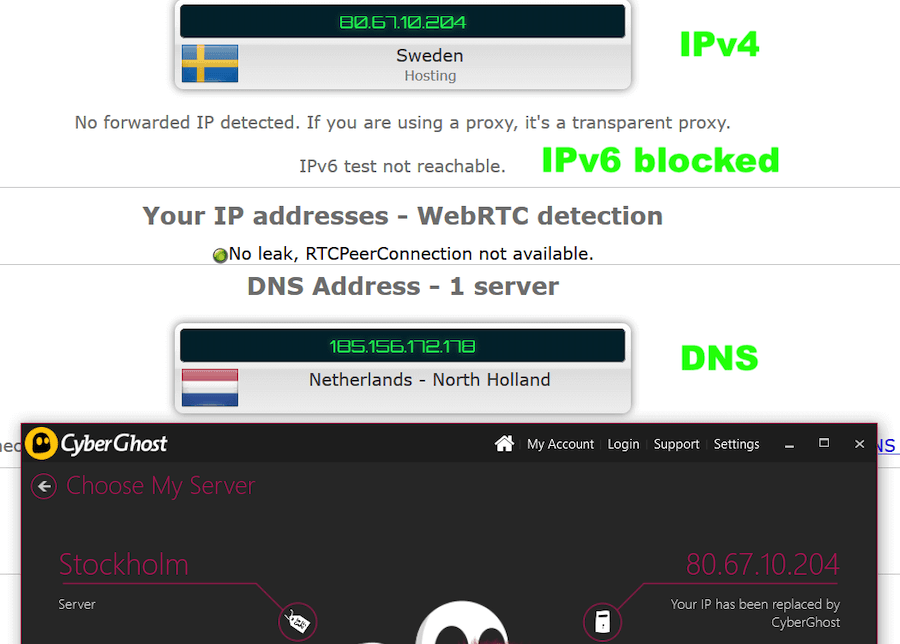 Aside from leak tests and encryption, there are also other security aspects to consider.

NordVPN is currently undergoing a huge overhaul to further improve security across the entire VPN. Here is NordVPN’s security plan, much of which is already complete:

In terms of security, NordVPN is really raising the bar. This is especially true when you consider the third-party security audits and ongoing penetration testing.

I have not seen CyberGhost announce any audits, bug bounty programs, vendor security assessments, and they do not run servers in RAM-disk.

One of the biggest differences between CyberGhost and NordVPN is in the area of privacy.

CyberGhost: As I mentioned at the beginning of this article, there are quite a few alarming issues with CyberGhost in the area of privacy:

Overall CyberGhost does not do well in the area of privacy.

NordVPN: NordVPN does significantly better than CyberGhost with privacy. Here are a few highlights:

NordVPN is also the clear winner in the privacy category.

6. NordVPN vs CyberGhost Netflix and streaming

In the category of Netflix streaming, there is once again a clear winner. First, we’ll look at CyberGhost. 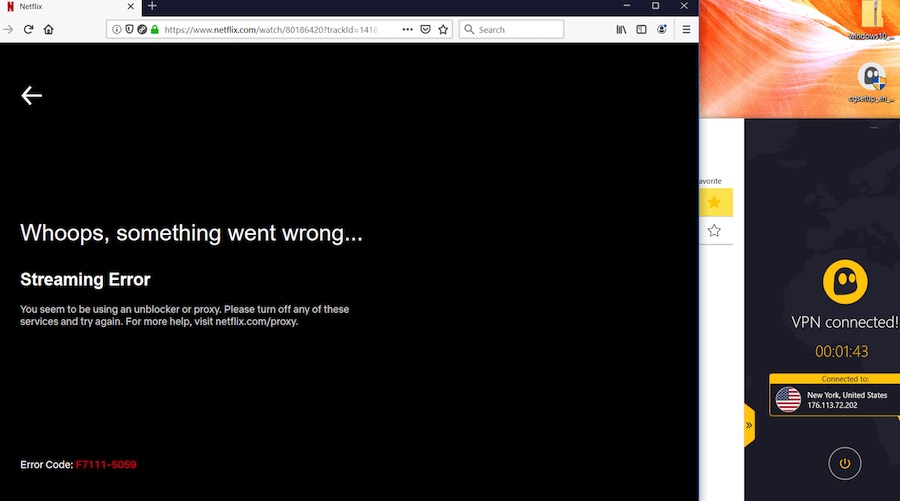 CyberGhost does not appear to be a good VPN to use with Netflix when the dedicated Netflix server is getting blocked. Additionally, we found it to not work well with BBC iPlayer and was blocked with the servers we tested. (See these best VPNs for BBC iPlayer instead.)

Next up was NordVPN, which has always worked well with Netflix. Sure enough, NordVPN unblocked Netflix without any problems at all. Here I’m streaming Netflix through a NordVPN server in the US. 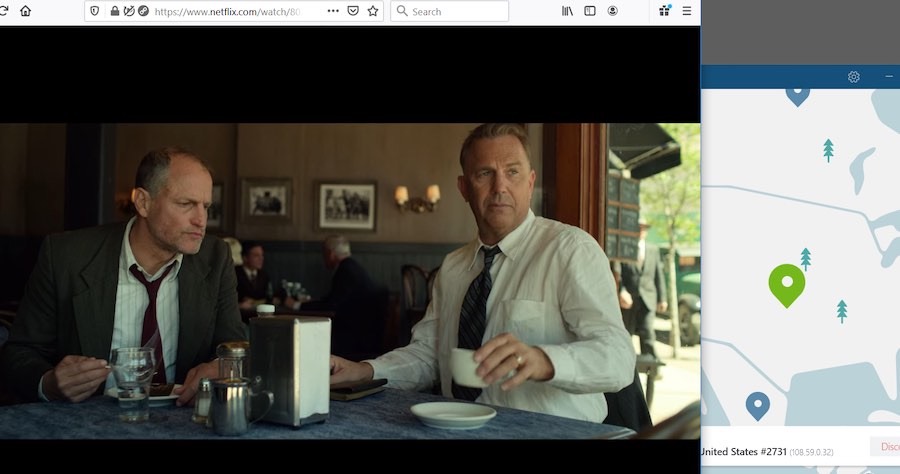 NordVPN unblocks all major Netflix regions around the world, including US Netflix, UK Netflix, Canada Netflix, Australia Netflix, and many other regions. It also works well with other streaming services such as BBC iPlayer, Amazon, and Hulu. If you need a good VPN that works with Netflix, NordVPN is one of the best choices.

7. Value: Is NordVPN or CyberGhost better?

Lastly, we will examine the question of value.

Does NordVPN or CyberGhost offer the best value for your money?

Recall that the cheapest price for each of these VPNs was about $3.50 per month. Given that the price is nearly the same, we will next examine which VPN works better.

Based on all of the test results, it is clear that NordVPN comes out on top. It is a better value for your money.

As you can see, the clear winner was NordVPN. Here is an overview of the test results from this NordVPN vs CyberGhost VPN comparison:

NordVPN is consistently one of our top recommendations in various privacy and VPN guides. It continues to perform well in all our tests, while also innovating and leading the VPN industry.

Given the current state of CyberGhost and the fact that it is now owned by a company with history of producing malware, I will not be recommending it on Restore Privacy. There are many better VPNs available and there’s no point in taking a risk with your private data.

If you want to give NordVPN a try, be sure to use the NordVPN coupon for maximum savings.

NordVPN Coupon
Get 70% off NordVPN today (drops the price down to only $3.49 per month)
70% Off NordVPN Here
(Discount will be automatically applied with the link above.)

Looking for other comparison guides?

So that wraps it up. This concludes our comparison of CyberGhost versus NordVPN. NordVPN clearly came out on top and is making a strong run to be the best VPN for 2020. Let’s hope it continues to improve in this competitive environment.