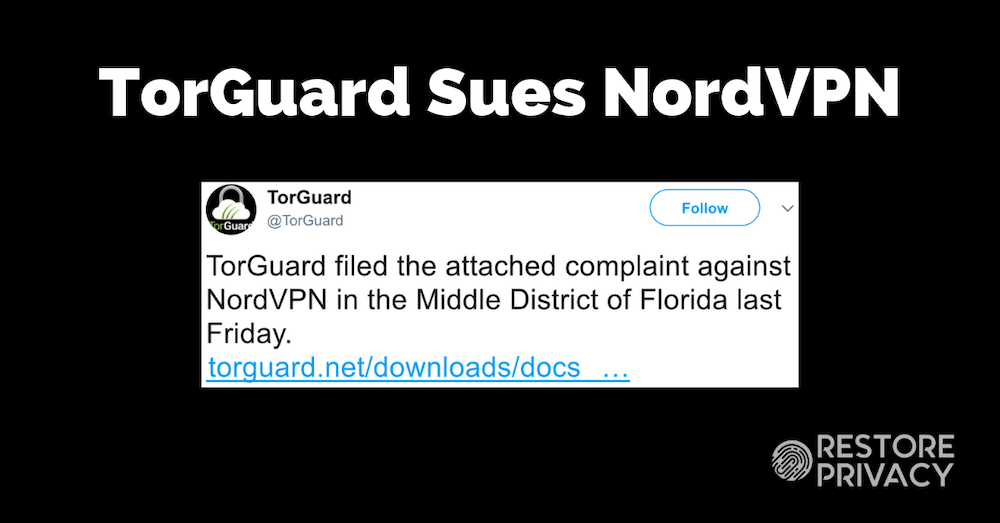 This article is periodically updated to reflect the TorGuard lawsuit against NordVPN and ongoing developments, which are posted at the bottom.

In an interesting turn of affairs, TorGuard recently announced on Twitter that it is suing NordVPN and a Canadian web hosting provider, C-Seven Media, Inc.

We have a full copy of the lawsuit that was filed in a Florida district court, which you can read here.

Why is a US VPN service in Florida (TorGuard) suing a VPN service based in Panama (NordVPN) and a Canadian web hosting provider (C-7)?

Buckle up, because this is about to get interesting!

On May 20, 2019, TorGuard published an interesting blog post where they allege the following events took place:

In the blog post, TorGuard does not name NordVPN or the hosting company involved, but the title of the post alleges that this was an attempt at “blackmail”. Four days later, TorGuard filed the lawsuit.

Here are ten important details from the lawsuit (TLDR):

Is TorGuard throwing mud? Is the lawsuit legit?

The VPN industry is very competitive and there is a lot at stake. That might be the biggest factor in explaining all this drama we’ve seen lately, with different VPN providers openly attacking each other in various venues (online and in court).

It seems clear that TorGuard has taken a hit due to various DDOS attacks, but the lawsuit does not appear to have any smoking gun evidence linking this to NordVPN.

Another big question is whether this Orlando, Florida court has legitimate jurisdiction to hear a case against NordVPN, which is based in Panama, and C-7, which is based in Canada. Neither of these businesses has a physical presence in Florida, so perhaps the lawsuit will simply be thrown out.

NordVPN has provided Restore Privacy with an official statement, hot off the press on May 29, 2019:

We are aware of the lawsuit, although it is rather difficult to take it seriously. All accusations are entirely made up. TorGuard (although probably by mistake) even filed a lawsuit against some Canadian web design company which we never heard about.

We received information that led us to finding TorGuard server configuration file available on the internet. We then noticed that one of their servers was left completely unprotected and publicly accessible for anyone. It contained private keys, scripts, and a number of other extremely sensitive information, which if misused, could have caused TorGuard and their customers some serious harm.

We disclosed the vulnerability to them with the best intentions. It is a normal practice and just the right thing to do, but they decided to file a lawsuit for blackmail. We didn’t even want to make it public.

We are very much looking forward to the following process. Also, now we have no choice but to take countermeasures.

You can also find our blog post about this case right here: https://nordvpn.com/blog/torguard-lawsuit/

It all started when we received information that led us to finding a TorGuard server configuration file lying in the open on the internet.

The file revealed how the TorGuard service was configured, displayed private keys, and contained a bunch of other infrastructural IP addresses, including the IPs of their authentication servers and similar assets. Because the file could have been part of some outdated legacy system, we decided to verify whether it was actually an issue by trying to access some of the IPs through a regular browser.

To our surprise, we saw that one of the servers was left completely unprotected. Anyone could have accessed it by simply entering the server’s IP into the address field of their browser. The server contained a number of scripts and other sensitive information. In the wrong hands, this information could have easily been misused, possibly causing major damage to TorGuard and their customers.

The post then explains how NordVPN communicated the security problem to TorGuard’s CTO Keith Murray and TorGuard CEO Benjamin Van Pelt “without asking for anything in return” – i.e. no “blackmail” attempts. NordVPN also alleges that TorGuard may have been involved in a “defamation campaign” targeting NordVPN.

Finally, NordVPN denies the other allegations of DDOSing and unauthorized access, which they claim are “fabricated” by TorGuard.

NordVPN concludes the post by stating their intent to counter-sue:

We will immediately move to dismiss TorGuard’s libelous lawsuit, but as long as we’re on the topic: filing false and malicious lawsuits and publishing false and misleading information is against the law. Therefore, we are filing a suit of our own on the grounds of defamation and libel.

We’ll closely watch how this all plays out and update this article accordingly.

For the record, this is also not the first time that TorGuard has been publicly accused of security flaws.

It’s not only the design that’s similar, but they also use the same geo-location API server address (highlighted in the comparison image above). This is our own geo-IP API server that we’re using internally (for software, extensions etc.).

Fyi, using someone else’s API servers, as a VPN service, is a very irresponsible mistake – just terrible from a security & privacy point of view. What they do by using someone else’s servers such as our API service, essentially, is to expose all their Chrome Proxy users’ IPs to a competitor. We don’t interfere with the queries in any way, but you should be aware that a malicious competing service could make use of such opportunity to log IPs of users or even worse, redirect them or forge the JSON replies to mess-up with the extension functionality: e.g. trolling scenario where connected location will display “Fort Meade, Maryland” regardless of real gateway IP location.

Now returning to the TorGuard and NordVPN lawsuit.

Conclusion on the TorGuard and NordVPN lawsuit

Time will tell how this all plays out.

While TorGuard has previously been in the news for security flaws, NordVPN was also in the news last summer for another lawsuit involving Hola VPN.

At the end of the day, it’s a shame that VPN in-fighting is getting dragged out in such a prominent and open manner. Not only does it hurt the VPN services involved, but it also damages the credibility of the entire industry.

Update 1: TorGuard erroneously names the wrong party in the lawsuit

In a surprising failure of due diligence, TorGuard has officially named the wrong party in their lawsuit.

As reported by the Orlando Sentinel:

An Orlando tech company on Thursday amended a federal lawsuit because it apparently named the wrong Toronto-based defendant in the initial filing.

TorGuard, which offers clients virtual private networks, or VPNs, had accused a company called C-7 of obtaining its trade secrets illegally and then using that information in a blackmail scheme.

However, when attorneys for C-7 reached out to TorGuard’s legal team to learn more, they discovered that TorGuard had incorrectly named their company in the suit.

Looks like someone failed to do the necessary due diligence before filing a major lawsuit in district court.

On June 26, 2019, TorGuard filed a complaint before the Middle District Court of Florida Orlando Division. I read through the entire complaint and it does not offer any new evidence or developments. Instead, it’s just a re-hash of what the original lawsuit already covered, which we discussed above.

TorGuard announced this update via their Twitter handle. In addition to tweeting about the complaint, TorGuard also posted a screenshot that appears to be part of an exchange that took place on a messaging platform.

"However much you deny the truth, the truth goes on existing." – George Orwell pic.twitter.com/tKRvLFtJFE

I’m hesitant to draw any conclusions here, since this is a small snippet of a conversation, but it does seem to suggest that NordVPN was requesting certain content be taken down. Is this “proof of blackmail”? Who knows. We’ll see how it all plays out in court.