Finding the fastest VPN can be a challenging task. After all, nearly every VPN on the market claims to offer the “fastest speeds” available. So how do you separate marketing slogans from real-world speed benchmarks?

To answer this question we tested numerous different VPN services and there was a clear winner that stands out from all the rest. In fact, if you want the fastest VPN, there is only one VPN we are recommending.

How we measure the fastest VPN

In assessing the fastest VPN, we examined four main areas that are all important for the best VPN performance:

Judging by these factors, we identified only one VPN service that consistently outperformed all other VPNs in our testing.

What is the fastest VPN?

Based on all of our tests, the fastest VPN right now is NordVPN.

It performed the best in our download speed tests, connection speed tests, and offers consistently fast performance. NordVPN also supports the WireGuard VPN protocol, which we found to be about 58% faster than OpenVPN in our testing.

Now we will examine how NordVPN performed in each of the four categories.

When it comes to measuring VPN performance, the first thing we look at is raw download speed. This is the key metric to consider and it is an important benchmark in all VPN reviews we do.

For our speed tests, we used a 500 Mbps baseline connection speed with a physical Cat7 ethernet cable to our test computer.

The fastest VPN speed we were able to achieve was with a NordVPN server in Seattle, using the WireGuard VPN protocol. Here was the speed test result of 445 Mbps:

The Seattle server was closest to our physical location and offered the lowest latency, at only 24 ms.

With all the speed tests we ran for the NordVPN review, it offered excellent performance across the board.

Here was another fast VPN NordVPN server in Los Angeles at 304 Mbps:

In my tests, even long-distance servers performed well with NordVPN. Here I’m testing a server in the UK and getting about 295 Mbps:

These test results are not an anomaly. We have seen NordVPN consistently improve performance over the past year as they have upgraded and improved their global server network.

With this level of performance, transferring large files, streaming movies, or even using a VPN for torrenting will work exceptionally well. Now let’s examine another area of VPN performance…

Another important consideration when choosing the fastest VPN is connection speeds. In other words, how fast the VPN is at establishing a connection.

Why having fast connection speeds is important

In testing out dozens of popular VPN services, I found that many VPNs suffer from slow connections. After hitting the “connect” button, I have seen some VPNs take up to 30 seconds or more to actually connect. Aside from the annoyance and inconvenience factors, this is also a serious waste of time, especially if you frequently switch VPN servers.

There are many factors that can influence connection speeds. Perhaps one of the biggest factors, however, is the VPN protocol itself. We have found that the WireGuard VPN protocol offers the fastest VPN connections. The WireGuard protocol is supported in all NordVPN apps and you can use it by selecting “NordLynx” in the settings area.

When using the WireGuard (NordLynx) protocol, we found connections with NordVPN to be almost instant. Here is what I noted in the NordVPN review:

When using the WireGuard VPN protocol, I found that NordVPN was extremely fast at establishing a connection — nearly instantly. While OpenVPN can take a few seconds (or longer), WireGuard offers near-instant connections. This makes switching VPN servers all the more quick and easy.

As noted above, OpenVPN can be slow to establish a connection. These slow connection speeds are annoying, particularly when using a mobile device that may go in and out of connectivity. 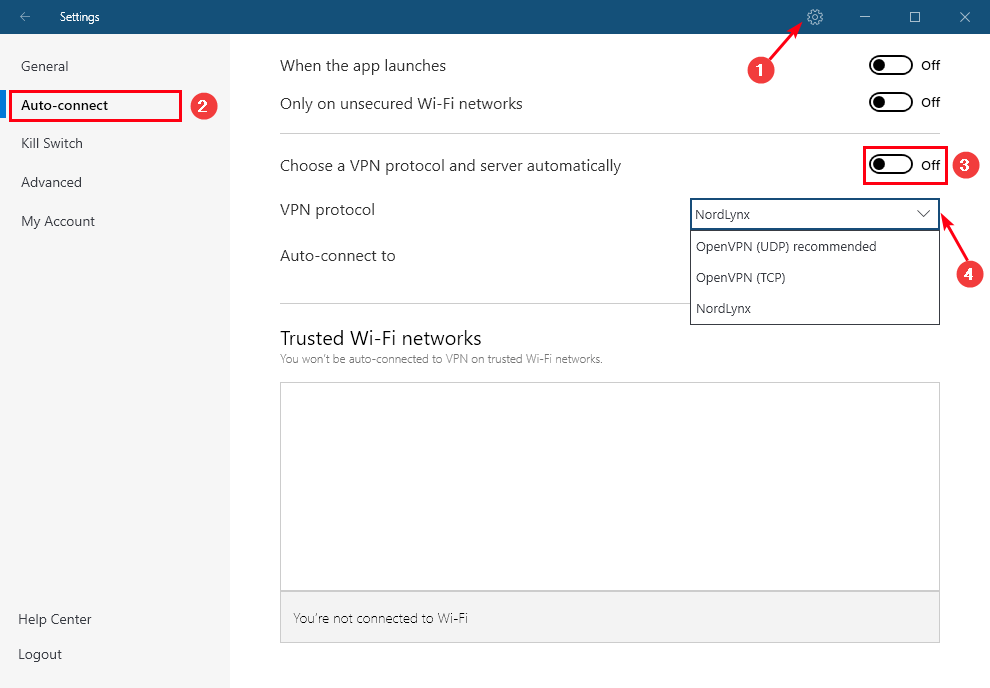 We will discuss the importance of choosing a fast VPN protocol further below.

Nobody wants a VPN that is fast with one server while being slow with others. In short, you want a fast VPN that provides consistent speeds throughout the server network.

We find this consistency with NordVPN and you can see all the speed tests screenshots I posted in the NordVPN review. It is a consistently fast VPN without hiccups.

Many VPNs, even top-rated VPNs, do not offer this consistency. For example, we found Surfshark to have great speeds with nearby servers, but slower speeds with long-distance servers.

To achieve faster and more consistent speeds, NordVPN explains on its website that it has invested significant resources into improving network performance. Here were some of the milestones and ongoing work done by NordVPN:

Currently, NordVPN has over 5,100 servers in 59 different countries around the world.

By now you should realize that choosing a fast VPN protocol is important for performance.

In previous years, OpenVPN was considered the gold standard, offering good performance and solid security. But in terms of performance, OpenVPN comes with some drawbacks in comparison to WireGuard:

In our WireGuard vs OpenVPN comparison, we found WireGuard to outperform OpenVPN in all servers tested. And on average, WireGuard was about 58% faster than OpenVPN (tested on a Mac OS, which is faster than Windows with VPNs).

But don’t take our word for it. Below you can see benchmark speeds released by the WireGuard project, where WireGuard outperformed OpenVPN and other VPN protocols by a wide margin.

These results also match what we have observed in testing VPNs that support WireGuard.

Therefore if you want the fastest speeds, you will want a VPN that supports WireGuard.

Note: Some VPNs support WireGuard, but getting it set up and running can be convoluted, such as with VPN.ac. With NordVPN, WireGuard is supported directly in all apps, allowing you to easily use this fast VPN protocol in a matter of seconds.

How to achieve the fastest VPN speeds

Ok, so enough talk, you want to have a fast VPN. Here is your checklist for getting the fastest VPN speeds right now:

Note: When you use NordVPN and select a designated country, the app will automatically select the fastest server based on the following two factors:

We have already discussed the importance of the following factors for getting the fastest VPN speeds:

We also recommended choosing the closest VPN server to your physical location. This will minimize latency and should give you the fastest VPN speeds.

Lastly, if your machine or device does not have adequate processing power, then it may struggle with VPN encryption. This isn’t an issue with most modern desktops, but it can be problematic with phones and routers. (See our VPN for Android guide for more information on performance with mobile devices.)

Why you should use a fast VPN

One drawback with VPNs is that they can slow down your baseline VPN connection speed. With a fast and reliable VPN, this problem will be greatly mitigated.

A slow VPN will seriously restrict your online activities, particularly for high-bandwidth activities:

To get the best VPN performance and the fastest speeds, we recommend using NordVPN with the WireGuard VPN protocol.

Want the best deal on NordVPN? Check out this coupon:

Have a question or comment about getting the best VPN speeds? Drop it in the comments section below.