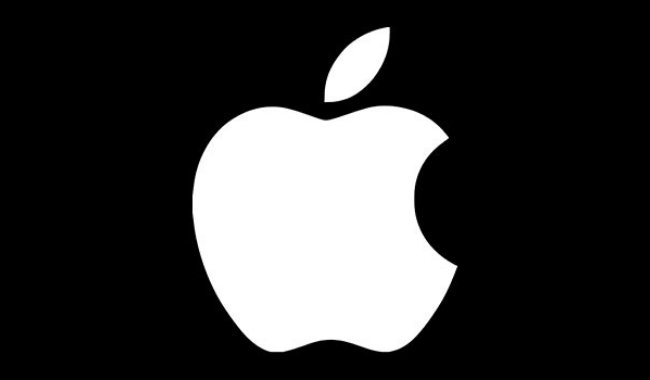 With over 200 VPNs currently on the market, finding the best VPN for Mac OS can be rather challenging.

As a longtime Mac (and Linux) user, I’ve found that many VPNs for Mac simply do not work well. Whether it’s due to data leaks that reveal your identity or broken features, most Mac VPN apps don’t make the cut.

Because Mac OS users are a smaller percentage of the total user base, many VPN services do not invest as much into their Mac OS clients. For example, Windows and Android users will outnumber Mac OS users by a wide margin.

Fortunately, there are still a few VPNs that work very well on Mac OS, which we’ll reveal below.

Ranking criteria: The best VPNs for Mac listed below in this guide all meet these criteria:

Now let’s get into the test results.

Here are the best VPNs for Mac OS: 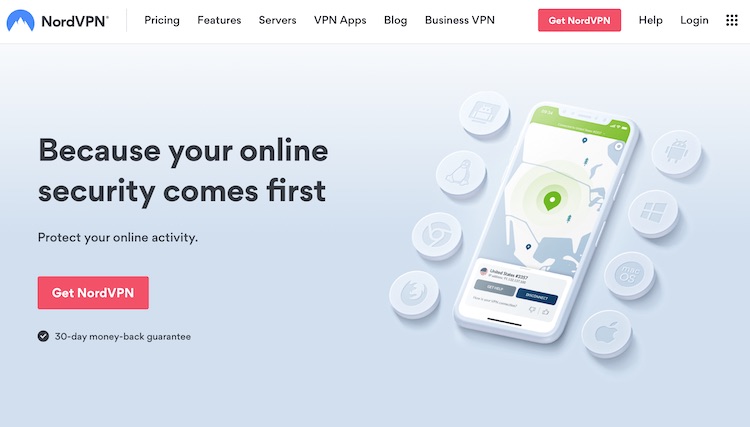 Get a 68% Off NordVPN Coupon

While there are many providers claiming to be the best VPN for Mac, the latest test results show that NordVPN earns the title. It continues to perform better than other VPNs in nearly all categories, particularly with performance, features, and security. With a large global team, NordVPN is strategically based in Panama, which is a privacy-friendly jurisdiction. The parent company, Nord Security, has also launched NordPass, a secure password manager, and NordLocker, a secure cloud storage and encryption tool.

NordVPN has a network of 5,500+ VPN servers located in 59 countries. All NordVPN servers run in RAM-disk mode without hard drives, making it impossible for any server to store data that could be accessed by third parties. NordVPN is a true no logs VPN service that has passed audits confirming both the no-logs policy as well as infrastructure and app security. Lastly, NordVPN is in the process of rolling out colocated (self-owned) servers in all locations with 10 Gbps bandwidth channels, which is extremely fast.

Another performance benefit you get with NordVPN is the WireGuard VPN protocol. NordVPN’s implementation of the WireGuard protocol is called NordLynx. It delivers much faster speeds than legacy VPN protocols, more reliability, and upgraded security. Below are the speed tests we ran with the NordVPN Mac OS app, getting speeds of 445 Mbps with US servers. This makes NordVPN the fastest VPN we have tested to date.

Aside from excellent performance, NordVPN also stands out from the crowd with the privacy and security features it offers. Mac OS VPN users can take advantage of these features with NordVPN:

The NordVPN Mac OS app has a great layout and is very user-friendly. You can select server locations from a map and easily enable the different privacy and security features.

If you want to use a VPN for streaming, NordVPN is one of the best choices available. It supports 15+ Netflix regions and has great apps for all types of streaming devices, even including Smart TVs and gaming systems. Additionally, NordVPN is currently ranked as the best VPN for torrenting with dedicated P2P servers that are fast and secure.

Considering that you can get NordVPN for only $3.71 per month with the 68% discount coupon, I’d say it’s one of the best values for Mac OS users. It holds the top spot as the best cheap VPN with the current rates.

NordVPN Cyber Deal is Now LIVE:
Get 68% off NordVPN plus a FREE gift added to your subscription (1 month to 2 years free).
68% Off NordVPN >>
(Discount is applied automatically through the link above.)

See our NordVPN review for more analysis and test results. 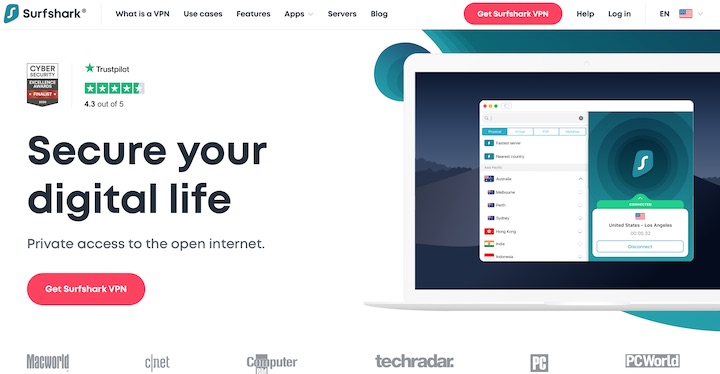 Surfshark is a newer VPN service with a lot to offer, at a very reasonable price. It is based in the British Virgin Islands and is a no-logs VPN provider, scoring greats marks in the privacy category. One big way that Surfshark stands out from the crowd is that it offers unlimited connections with your subscription, while most VPNs give you five or six.

Like NordVPN, Surfshark also supports the WireGuard VPN protocol. Within the Surfshark Mac OS VPN client, you can select between OpenVPN, IKEv2, and WireGuard. And while NordVPN was slightly faster in our NordVPN vs Surfshark comparison, we still could get 397 Mbps with Surfshark servers. With most VPNs averaging around 100 Mbps, Surfshark delivers excellent performance:

Surfshark is also one of the best VPNs for streaming. It consistently works with numerous Netflix libraries, BBC iPlayer, Hulu, Amazon Prime, and more. Surfshark offers apps for all types of streaming devices, including Smart TVs and even gaming systems. They even have an app in the Amazon store if you want to use a VPN with Firestick.

Surfshark has a large network of 3,200 servers in 65 countries. And like ExpressVPN and NordVPN, Surfshark runs all servers in RAM-disk mode for a higher level of data security. Torrenting is allowed on every server, making Surfshark a great VPN for torrenting.

While Surfshark has many features in common with NordVPN, there is one area that it differs. Surfshark does not offer static IPs, but see these other static IP VPN services if this is a feature you need.

Below is the Surfshark Mac OS VPN client that I tested for this guide. It performed well, without any bugs or crashes. 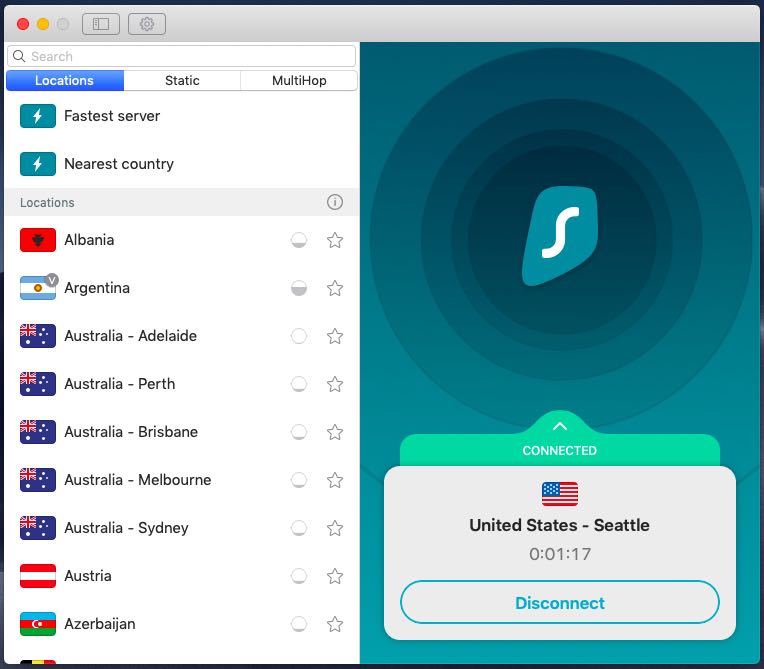 Our Surfshark review has more info and test results. 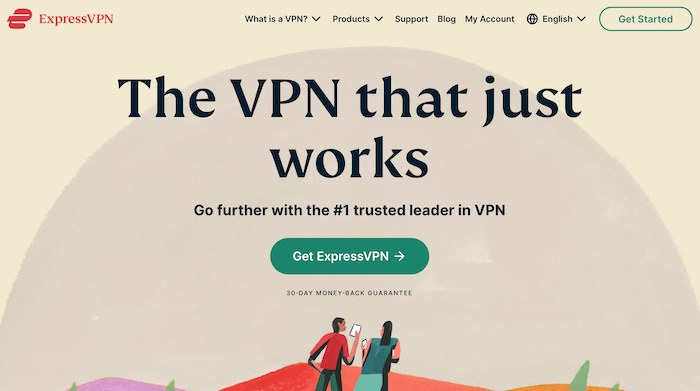 Get a Three Months Free Coupon

Rounding out our list of the best Mac VPNs is ExpressVPN. It’s based in the British Virgin Islands and offers a secure and user-friendly VPN apps, excellent security, and a large selection of servers around the world.

The ExpressVPN Mac OS client performed well in testing for the ExpressVPN review. There were no leaks, bugs, or connection issues identified in my tests. ExpressVPN is a very reliable and user-friendly service. Below you can see the ExpressVPN app for Mac OS with its clean and minimal design. 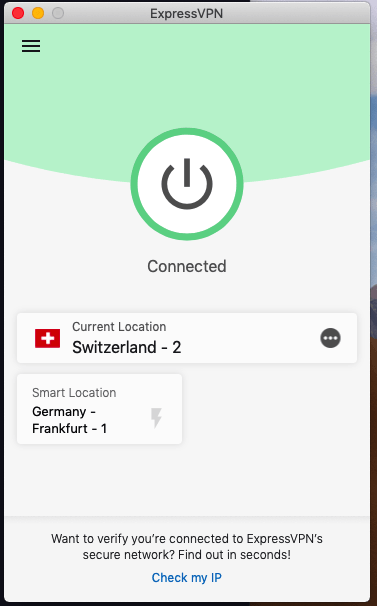 In addition to fast speeds and reliability, ExpressVPN also does well with security:

Overall, ExpressVPN remains an excellent VPNs for Mac OS users. If you are in the Apple ecosystem, you will also be pleased with ExpressVPN’s iOS app, which will work great for your iPhone or iPad.

Lastly, if you need a good VPN for Netflix and other streaming services, ExpressVPN has you covered. It works with Netflix, Amazon Prime, Hulu, and many other platforms. It is also a great VPN for Kodi streaming as well.

ExpressVPN Discount Coupon
Sign up for the 12 month plan, and get 3 months FREE (49% Off)
Get Three Months Free + 49% Off ExpressVPN >>
(Discount is applied automatically through the link above.)

How to use a VPN on Mac OS

Using a VPN on Mac OS is very simple. For most people, the best option is to use a custom Mac OS VPN client (app) from one of the VPN services on this page. This will give you the full leak protection settings and all features. If you don’t want to use your VPN provider’s Mac OS client, there are also some other options that we’ll cover below.

Here’s how to use a VPN on your Mac device, whether it be a MacBook Pro, Air, or an iMac.

Here is a step-by-step installation video for setting up NordVPN on your Mac:

Now let’s look at another option for using a VPN on a Mac device.

Tunnelblick – Tunnelblick is a good, basic Mac OS VPN client that is free and open source. The main drawback is that Tunnelblick is very limited on features – such as a kill switch or IP leak protection. Unless you create custom firewall rules, your regular internet traffic will leak out whenever the VPN connection is not active.

Viscosity – Viscosity is a great third-party OpenVPN client that’s offered for Mac OS and Windows. The Viscosity Mac OS client provides many features and customization options. Unfortunately, Viscosity also does not have a kill switch.

There is also the option to use the open source WireGuard client if your VPN supports WireGuard.

Note: I generally just recommend using your VPN provider’s client for Mac, rather than a third-party app. This will give you access to all of the VPN’s features and also include support from your VPN provider.

Tips for using a VPN on Mac OS

Here are some general tips for using a VPN on Mac OS:

Leaks – Be careful with leaks when using a VPN on Mac OS. While many Mac VPN clients have bugs and problems with data leaks, all of the VPNs recommended in this guide passed all tests and were found to be secure. They also incorporate a kill switch into the Mac OS VPN clients. You can run your own VPN tests to identify issues.

Firewall monitor – A firewall monitor is a privacy tool that allows you to see exactly which apps are using your internet connection. One great option is Little Snitch by Objective Development. Some people combine the free Tunnelblick OpenVPN client with Little Snitch for a firewall kill switch option.

Secure browser – When using a VPN on a Mac it’s good to remember that your internet browser can be a major vulnerability. As discussed with browser fingerprinting, there are many advanced methods to identify and track your activities, even if you’re behind a good VPN. One tip would be to stop using the Safari browser and instead of using Firefox with privacy modifications, such as disabling WebRTC. There are also other secure and private browsers to consider as well.

As you can see, there are many good Mac VPN options. And with more people streaming content online at home, a VPN is a crucial tool for getting access to more content from anywhere in the world.

Of course, VPNs also remain a critical tool for privacy and security. This is increasingly true in 2021 where internet service providers record browsing activity (in many countries) and pass this data on to governments and other third parties. So the solution is to simply use a good VPN at all times.

Be sure to grab the best deal with the discount links below.

To wrap everything up, the table below highlights the best Mac OS VPN services based on the latest test results.