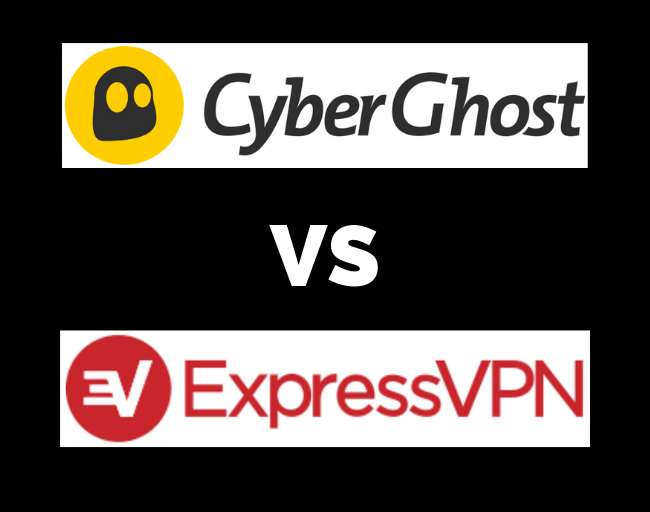 CyberGhost and ExpressVPN are both large VPN services with many users – but which one comes out on top in back-to-back testing?

In this CyberGhost vs ExpressVPN comparison guide, we’ll take a close look at each VPN as well as in-depth test results. These tests revealed a clear winner. Here are the areas we’ll examine:

When you select a VPN, you put a lot of trust in the service to secure your traffic and data. Therefore it is only prudent to ensure you are going with a reputable provider with a clean track record. With this in mind, we’ll examine both ExpressVPN and CyberGhost.

ExpressVPN is a premium VPN service with an excellent reputation going back many years. It has a squeaky clean track record and has never suffered from public security issues or data controversies, such as with IPVanish or PureVPN (logs cases). Unlike CyberGhost, ExpressVPN has also passed independent audits for security and to also verify the no-logs policy.

ExpressVPN is based in the British Virgin Islands. This is an ideal jurisdiction for privacy because the BVI has no data retention laws and is not a member of any surveillance alliances. We also see other VPNs incorporating here, such as with Surfshark, due to the favorable privacy laws.

CyberGhost started out as a Romanian VPN service developed by a team of German and Romanian technicians. In 2017, however, CyberGhost was acquired Crossrider. Crossrider is the infamous company with a history of producing malware and infecting devices through software bundles. Since then, Crossrider has purchased Zenmate VPN and changed its name to Kape Technologies. Last year we learned that Private Internet Access was also acquired by Kape/Crossrider.

With the troubling ties between these VPN services and a parent company that has a history of producing malware, I am no longer recommending PIA or CyberGhost. (CyberGhost also did not do well in testing for the CyberGhost VPN review.)

Despite being owned by an Israeli parent company (Kape), CyberGhost officially lists its jurisdiction as Romania. Romania appears to be a good jurisdiction and is home to other VPN services, such as VPN.ac.

Speeds are a huge consideration for VPN users. After all, what good is a VPN that is simply too slow and interferes with everything you do online?

In my recent review of ExpressVPN, I could consistently get speeds that were close to my full baseline (non-VPN) speed of 160 Mbps. However, with my latest tests of CyberGhost, speeds were not very good. Let’s see who comes out on top in the CyberGhost vs ExpressVPN speed tests.

Note: My baseline download speed for all tests was 160 Mbps. I used the OpenVPN protocol for testing in the ExpressVPN and CyberGhost apps.

CyberGhost: First I tested a CyberGhost server in Germany that gave me 78 Mbps.

Given my baseline speed of 160 Mbps, this is definitely not great.

ExpressVPN: With the ExpressVPN server in Germany, I got much better speed test results in comparison to CyberGhost: 144 Mbps.

Next, I decided to test some servers in the United Kingdom. In my CyberGhost review, I found that UK servers were often congested and slow.

Suffice to say, CyberGhost is not the best VPN for the UK. This was another disappointing speed test.

Now for the comparison with ExpressVPN.

ExpressVPN: Using an ExpressVPN server in the UK, I was able to get around 147 Mbps.

With all of the servers I tested in Europe, ExpressVPN outperformed CyberGhost by a large margin.

Next, I tested servers in the United States and Canada, which were further from my physical location in Europe, but the results were similar.

This isn’t too bad when you consider the longer distance – but it’s also not great.

As before, ExpressVPN provided significantly faster speeds on all servers in the United States and Canada. It is currently ranked as the best VPN for Canada with the fastest and most consistent speeds.

Note: These test results were also not surprising. ExpressVPN consistently outperforms other leading VPN services, as you can see in the ExpressVPN vs IPVanish speed comparisons.

3. Prices and refunds: CyberGhost vs ExpressVPN

In this section we’ll take a close look at both price and value (what you get for your money).

CyberGhost price – CyberGhost definitely costs less than ExpressVPN, with the cheapest plan coming in at $3.50 per month for the two-year subscription.

Although CyberGhost is affordable with long-term subscriptions, it certainly is not the best cheap VPN with the problems we’ve identified so far. There are better options in this category, particularly with NordVPN.

Now we will compare CyberGhost to ExpressVPN.

ExpressVPN price – ExpressVPN offers reasonable prices, but they are still more expensive than CyberGhost. Fortunately, you can use this 49% off coupon, which includes three months free and drops the price down to $6.67 per month. Here are the discounted prices with the coupon above:

ExpressVPN refund policy – ExpressVPN provides a 30 day money-back guarantee on all subscription plans. There are no exceptions, fine print, or special rules for receiving your money back, simply request a refund within 30 days.

Price and Refund Winner: CyberGhost wins this category simply because it is cheaper

Both CyberGhost and ExpressVPN offer a diverse lineup of features.

First we will examine CyberGhost. Although CyberGhost is a basic VPN service without too many frills, it does offer these features:

In comparison to CyberGhost, ExpressVPN offers more features for all types of users. Here is what you get with ExpressVPN: 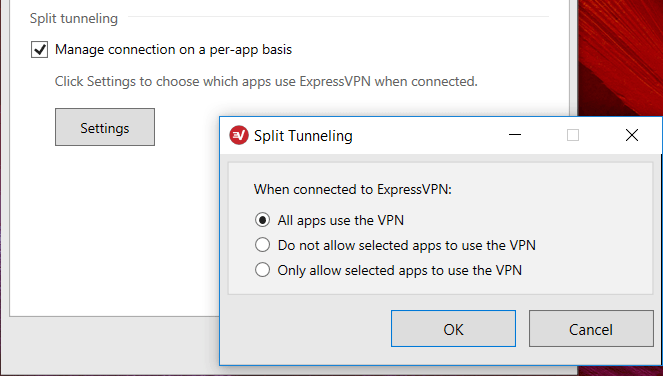 Another big consideration with features is streaming, which we’ll cover next.

5. Streaming and Netflix: CyberGhost vs ExpressVPN

Streaming media is a big reason that many people are using VPNs. Whether it’s watching episodes of Netflix or streaming shows from BBC iPlayer with a VPN, it is now easy to get full access to media, wherever you are located in the world.

CyberGhost – With my latest round of tests for the review, I found CyberGhost to not work well with streaming. Aside from some connectivity issues, I noticed that CyberGhost was getting blocked by Netflix, even when connected to the dedicated Netflix VPN server in the US: 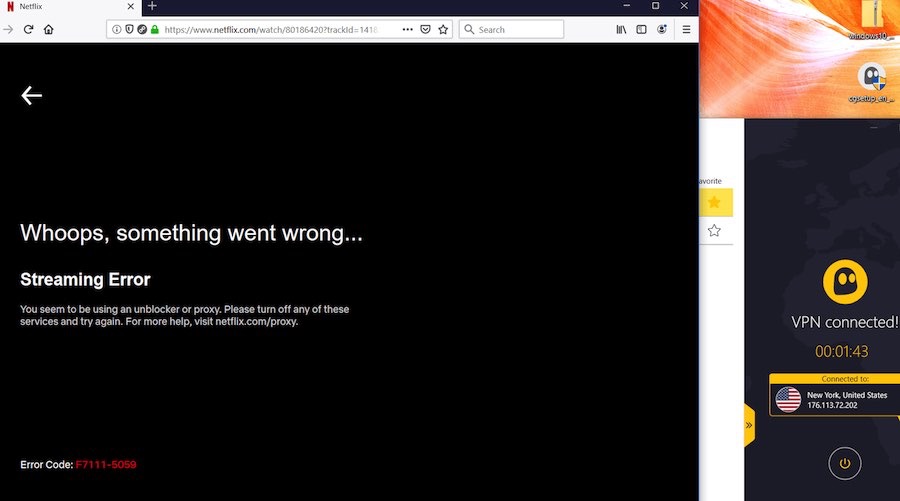 ExpressVPN – ExpressVPN is arguably the best VPN for streaming with 24/7 access to Netflix and many other streaming channels around the world.

Below I’m using ExpressVPN to stream US Netflix from my location in Europe. 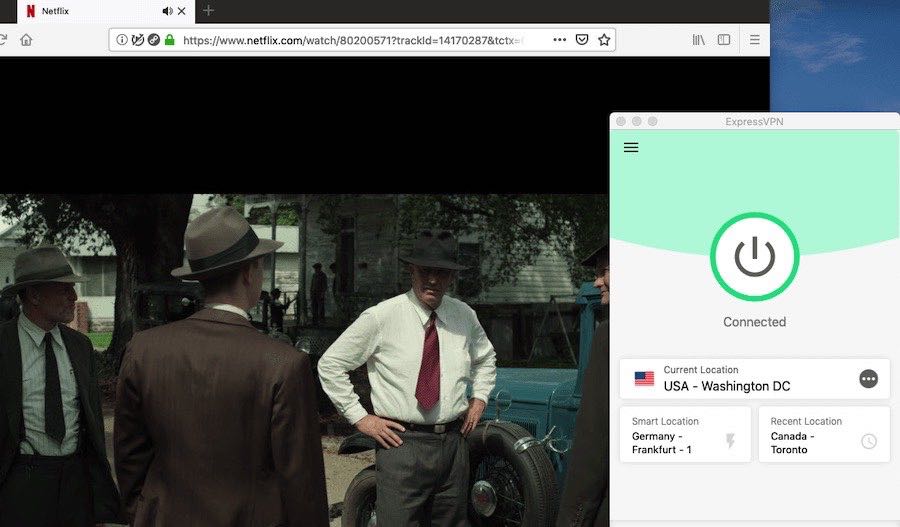 ExpressVPN is currently the best VPN to unblock Netflix. It unblocks numerous Netflix regions around the world and also works with many other streaming services. You can use this VPN for Disney+, as well as BBC iPlayer, Hulu, Amazon Prime, and more. (It’s currently one of the best all-around VPNs for streaming.)

6. ExpressVPN vs CyberGhost: Security and Encryption:

In terms of security, both ExpressVPN and CyberGhost passed the basic leak tests (an explanation on testing procedures can be found in the VPN test guide).

I did not find any leaks with either VPN service when testing the Windows and Mac OS apps.

With encryption, ExpressVPN and CyberGhost are pretty comparable:

Although these encryption levels are very similar, ExpressVPN has the slight edge.

Based on my research for this comparison, CyberGhost has not completed any third-party audits.

ExpressVPN really excels in the area of server security. In 2019, they converted their entire network over to only run in volatile RAM memory. This means that their server network does not run on hard drives, which can be a security and privacy risk. With RAM memory, nothing can be stored on the server, which means server data cannot be seized by third parties. ExpressVPN refers to this feature as TrustedServer.

To my knowledge, CyberGhost does not run any of its servers in RAM-disk mode.

CyberGhost – CyberGhost has a few issues that I noticed in the privacy category:

If you are looking for a good VPN for privacy, CyberGhost may not be the best choice.

ExpressVPN – ExpressVPN is a solid choice for privacy. It is one of the few no logs VPN services that have been tested, audited by an independent third party, and also verified. Outside verification of logs is also a trend we’ve seen with NordVPN and PIA.

Although ExpressVPN does use Google Analytics on their site (as does CyberGhost), they do not use any invasive session recording scripts like CyberGhost does with Hotjar.

ExpressVPN’s privacy features ensure your identity and online activities stay secure and out of the hands of third parties.

ExpressVPN and CyberGhost are both popular VPN services that are recommended on many sites. Nonetheless, there was a clear winner in this CyberGhost vs ExpressVPN comparison guide.

ExpressVPN came out on top in nearly every category tested:

While CyberGhost is the winner in the price category, because it is cheaper, the key consideration is value. In terms of value, the question to ask is: Which VPN offers a better value for your money?

ExpressVPN outperformed CyberGhost by a wide margin, while also unblocking Netflix and offering more security features. Additionally, ExpressVPN has also passed independent audits, which gives it a big boost in the trust category – an area where CyberGhost is really lacking.

When you consider overall performance, security, and features, I would say ExpressVPN offers the best value, even though it is a bit more expensive.

If you want to give ExpressVPN a shot, there are currently offering the following discount coupon:

ExpressVPN Coupon
Sign up for the 12 month plan, and get 3 months FREE (49% Off)
Get Three Months Free + 49% Off ExpressVPN >>
(Discount is applied automatically.)

If you are looking for a VPN that is around the same price as CyberGhost, then NordVPN would probably be a good fit. Check out the NordVPN coupon page for the latest discounts and deals.

For additional recommendations, you can see the best VPN services guide.

Have you used either ExpressVPN or CyberGhost VPN? If so, leave your experience below in the comments to help others.